How Upgrading to Laravel 5.7 is the Best Thing for Your Web App?

Laravel’s introduction in 2011 took the web application developers’ community by storm and how. Posing as an advanced PHP framework alternative to the existing options, Laravel turned many development tasks faster, easier and rewarding. From authentication implementation and error and exception handling to form validation and more, Laravel accomplishes these tasks in minutes and without hundreds of repetitive code lines. Each version of Laravel has successfully unveiled several outstanding features in the past 7 years and the latest Laravel 5.7 version promises even better capabilities than its predecessors.

To begin with, here are few statistics that speak volumes about Laravel’s current and growing popularity.

The above facts and figures are enough to establish Laravel as web application developers’ favourite. Now, let’s find out some of the most amazing benefits that Laravel offers to enjoy this level of popularity:

If we take a look at the geographical distribution of Google search results for various PHP frameworks, we get a clear picture: 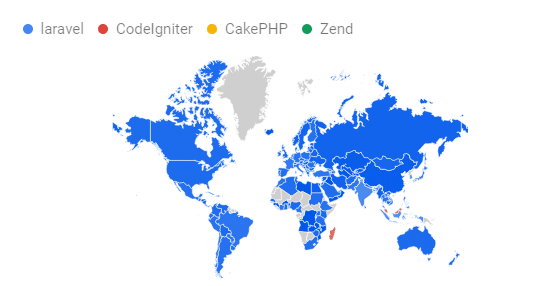 There are many websites built in Laravel that have managed to achieve high ranks on Google and other popular search engines. Not only are these websites praised for their user-friendliness, but they also are admired for receiving high traffic volumes. Some of them, as mentioned by BuiltWith Trends, include:

According to the BuiltWith Trends, there are 1,077,555 websites (including the historical ones) that use Laravel. Out of them, there are 103,177 live websites across the world using the framework. The trends get even more interesting as they reveal that:

Going further, website owners in different categories prefer to hire laravel developer for web app development. Some of the top categories include (SimilarTech): 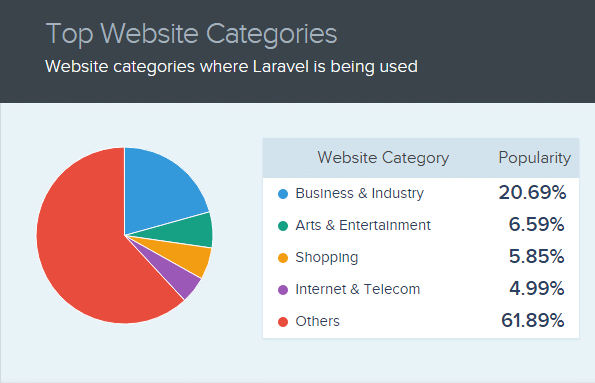 Laravel Improving with Every Version

Keeping up the tradition, Laravel 5.7, released in August 2018, promises more features and better performance than its predecessors. Find out how.

By disclosing each of the above improvements, features and packages, Laravel 5.7 surely adds to the fondness it enjoys with the growing community of developers.

Upgrading to the latest version of Laravel definitely adds to the advantage of running a high-performing web app. If you wish to upgrade from Laravel 5.6 to 5.7, you won’t need to have a new PHP version. The upgrade can be done using the PHP version 7.1.3 as both Laravel versions use the same PHP version. If you still use Laravel 5.4 or 5.5, you would require the PHP versions 5.6.4 and 7.0.0 respectively for the upgrade.

Hiring a laravel development company helps in a seamless upgrade to the latest version by ensuring the backup, making sure all the modules are functional and finally deploying the website with minimal downtime. If you are developing a new web app, an expert laravel developer can help you build the app using Laravel 5.7. Some of the advantages of hiring a Laravel expert include: