Mobile apps have brought the world to our fingertips: this is something that we had accepted years back. And today, we mobile users have been made ourselves accustomed with using our basic hand gestures to interact with the app. In this article, we are going to discuss how a single click has evolved into a multi-touch technology and the measures that app designers should take to make it seamless. 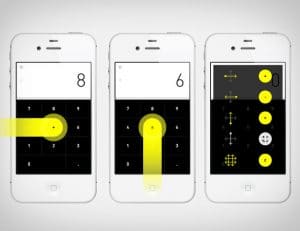 The days when the users hovered and touched the app to initiate an action are long gone, today they swipe, slide, pinch, and expand. This surge in gesture-based interactions has brought in a complete change in how the apps are designed today, adding it in the strategy of all major application development company, globally. In fact, it is soon becoming a prerequisite of a successful mobile app. Gestures are more than an entertainment quotient, they give users familiarity and an ease of use: a feeling of interacting with a physical object.

While it is easy to interact with buttons through a single click, gesture movements are as easy as they come. The hand movements that we use on physical objects are more or less same as what we use on mobile phone.

It is much easy for the user to delete an item by swiping it as compared to clicking on it once to select and then again to select the delete option from the pop up. Gestures can offer a highly delightful experience for the users.

Gestures limit the number of buttons appearing online. It gives more space to the app to add in content.

Gestures have definitely made app interaction much easier and natural for the users. As for the developers, the level of potential that gestures show is the highest. While single clicks have been tried and tested, you can add new gestures to bring forth an action: ones that have not been seen before. And because the concept is still new, the chance of experimentation is very high here.

Now that you know the potential that gesture-based interaction holds, let us see how you can exploit the UI design.

Before we get to the point where we discuss how to make your gesture interface easy to use, there are some factors that point towards what can go wrong in the glorious interface design. Here it goes…

What happens with gestures is while a swipe would mean A for one app it would mean B for another. For a user who is on more than three gesture based apps, it can get very confusing to judge which movement to make to initiate an action.

Unlike button led interactions, it is difficult to judge where the user came from in gesture-based interface. There is no record to create a path if for some reason app performs differently.

Now, while you cannot do much about the lack of measurability, you can remove the chance of confusion. Which brings us to our last segment – how to make your gesture interface easy to use and a success.

You should give the users visible hints demonstrating the gestures that they should use and the action it would initiate. With the help of animations, you should tell the users exactly what they have to do, without giving them a scope to guess the next move. For the ones who forget, have a demo tab on any one corner or place it in menu.

Are gestures the future of all mobile interactions? Yes. Are they the next Clicks? Yes. Gestures are all – facilitator, source of entertainment, and a massive time saver. It’s time you incorporate gesture-based user interface in your app.

Author Bio: Tripti writes for ChromeInfotech, a leading mobile application development company. She has three years experience writing on education, real estate, and career. She now aims to know the nitty gritty of the fast-paced mobile and technology world.