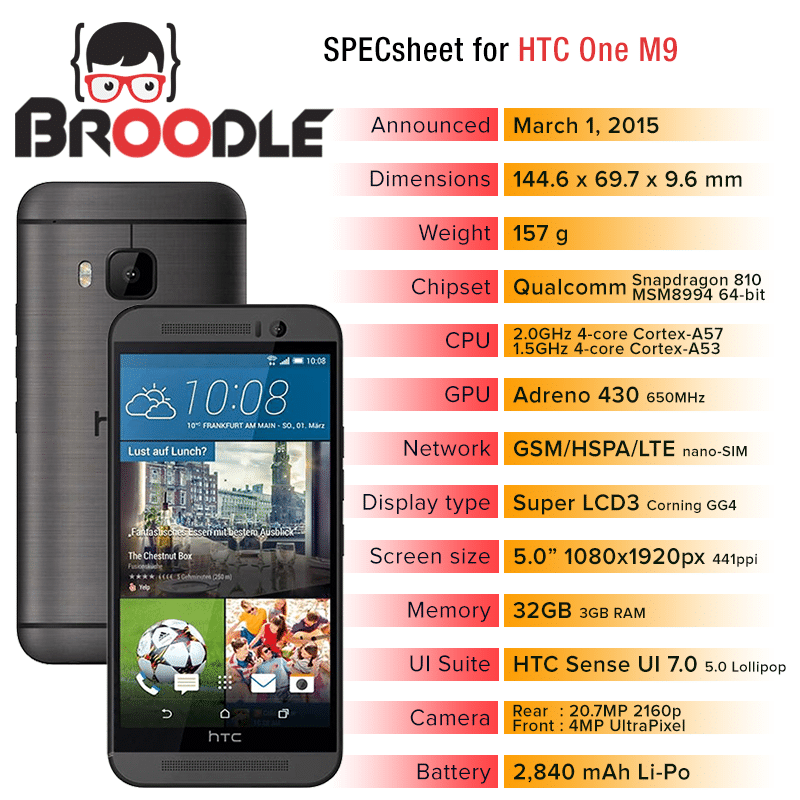 HTC has unveiled its newest flagship the HTC One M9, the third iteration of the One during a keynote at the 2015 Mobile World Congress in Barcelona just now. This device is gorgeous! Being crafted from a single block of aluminium, the HTC One M9 is a true flagship that set another gold standard to the mobile atmospheres. HTC continue with its smooth brush-finished back on this M9, adding a dual-tone design with mirrored edges.

Performance
HTC One M9 is powered by the powerful 64-bit octa-core Qualcomm Snapdragon 810 with 4 Cortex-A57 core running at 2.0GHz and another 4 core of Cortex-A53 running at 1.5GHz. The chipset was coupled with the Adreno 430 GPU running at 600MHz. (The previous M8 is powered by the quad-core Snapdragon 801 and Adreno 330). There are 3GB of RAM on board which can essentially can support tons of heavy multi-tasking activities. HTC thrown in 32GB of internal storage into this M9, and luckily it also comes with expandable storage via microSD card up to a whopping 128GB.

Display
HTC still using a 5-inch 1080p Super LCD3 screen on this One M9, just like the M8. However this screen is protected by the latest Corning Gorilla Glass 4, with is much stronger and resistance to scratches than the Gorilla Glass 3 (M8).

Cameras
The most notable upgrades to this One M9 is the cameras. While the two previous generation of Ones has been utilizing the HTC 4MP UltraPixel camera, this M9 is equipped with a 20.7MP main camera capable of shooting an image of 5,376x3752pixels. This main camera can also shoot a 2K video at 30fps, 1080p@60fps and 720p@120fps, plus with automatic simultaneous video and image recording capability.  There is a dual-tone LED flash and stereo mics for recording. HTC isn’t forgetting its 4MP UltraPixel camera by inserting it on the front as a selfie-friendly front facing camera.  On the software side, HTC brings the HTC Eye Experience software that allows the user to “create Split Captures, take Voice Selfies, apply Live MakeUp and more.”

BoomSound
HTC has updated its BoomSound stereo front facing speaker system on this One M9. By partnering with Dolby, the M9 will “recreates the 5,1 surround sound effect to deliver true left and right channel sound for a dramatic cinematic experience.” With three fingers swipe. user can share music and video from the M9 to capable home stereo devices via BoomSound Connect.

Other features
The battery for this phone has been bumped up to 2,840mAh up from 2,600mAh in the M8, which HTC claimed will provide 391 hours of standby time compared to 271 hours for the One M8. Connectivity wise, this device support GSM HSPA 42.2Mbps and LTE Cat6 300/50Mbps. The HTC One M9 will be shipped out with HTC Sense UI 7.0 on top of Android Lollipop 5.0.x. HTC One M9 will  be available in 4 color choices: Gunmetal Gray, Amber Gold (below), Silver/Rose gold, Gold/Pink 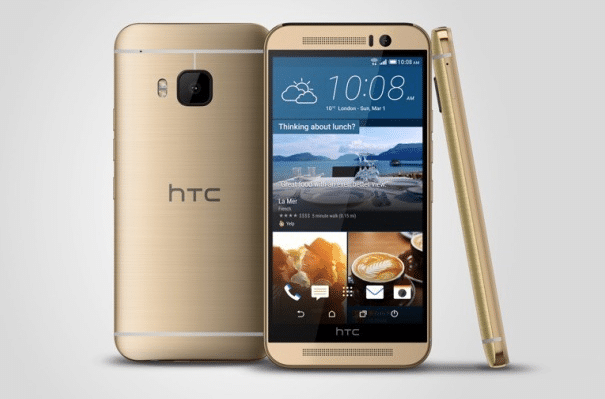