With the rise in the use of smart home appliances, every manufacturer is putting a lot of effort into making more affordable smart speakers. Since Amazon holds a majority of the market when it comes to smart speakers, they were likely going to be the first in line to manufacture something like this new more affordable and portable “smart -not a speaker” Amazon Echo Input. So, here’s our review for the newest and tiniest smart “not a speaker” by Amazon. 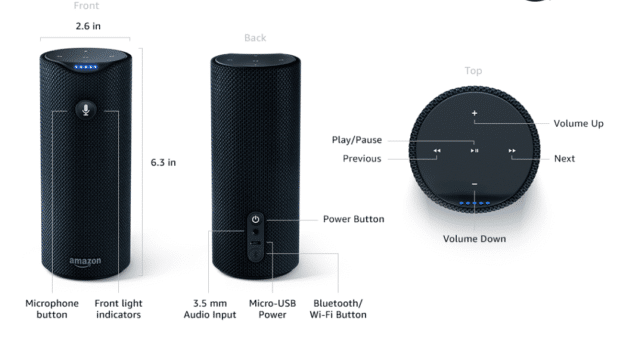 The Amazon Echo Input is clearly not a speaker like the Echo dot instead it is a device built to make any stereo speaker of your choice into a smart home assistant. So? Yes, now you can use the high-quality speaker you once only used for music streaming with Alexa always around.

The Amazon Echo Input is a mingy little round disc that can be hard to notice without your lenses. The Echo Input has two buttons on top, one that can mute the four microphones used to give the voice “input” to Alexa and the other that will manually trigger Alexa without using any wake-up voice commands. Unlike its older siblings, the Echo Input doesn’t have any glowing ring of LED’s on its surface instead this mingy little round disc has a single mingy little LED dot. The LED dot on the top shows a blue light whenever Alexa is enabled or giving output and a red light whenever there is trouble in connecting with the speaker. For charging and wired connection with the speaker, a USB to micro-USB port and a 3.5mm output port are given on the side of the device. You can easily buy this device online using Paytm Mall Cashback with great deals.

All in all, the Echo Input has a really low-cost design with plastic all over the place and no signs of fabric.

The Echo Input, however small works almost exactly like its other elder siblings do. It consists of the same mic array as the Echo Dot. Since these appliances lack an otherwise highly conventional visual interface for inputs, the Alexa app does most of the work in the absence of an interface, however, the lack of an interface is not much noticed since most of the work is done through voice commands. You can connect the EchoInput with your desired speaker via using Bluetooth or a 3.5mm cable, there is no optical output or RCA but we have to consider the fact that this is a budget device. The Bluetooth connectivity of the Echo Input and the connected speaker works just fine when in the same room.

The Echo Input does most of the things flawlessly just like its elder siblings but lack of an in-built speaker does have its demerits. Alexa in the Echo input is always listening to meaning that it is always ready for your input command however some stereo speakers have a tendency to turn themselves off after some time if no input is given, the Alexa app does have a solution to this problem where it will alert you on your phone if it feels like the connection is lost or the speaker has been turned off but still the app doesn’t always work. In terms of performance better options available in the market and one can buy those using Mobikwik Promo Code with great offers.

The Echo Input is available right now in two colours white and black, with a retail price of ₹2,999/ £19.99on Amazon. The price of the Echo Input is almost around 30 to 40 per cent less than the price of the Echo dot, depending on your location. The low price means a cheaper design and builds quality, the price and the functionality of the device seems right as the majority of the people purchasing this device will mostly be using it as an addition for their speakers or for experiencing Alexa without spending much of their fortune.

The Echo Input is a rather small and cost-efficient device the production of which can be considered as a smart move made by Amazon. However, we feel like there’s more room for improvement even in this price bracket. With minimal or no Bluetooth connectivity issues (none if you’re just using the 3.5mm output) the Amazon Echo Input is a really useful device if you’re looking to turn your old speaker into a smart speaker.

Our suggestion: The Amazon Echo Input is for you if you’re just looking for an additional device for your speaker, however, if you’re purchasing it just for the purpose of using Alexa, we suggest you put some extra money and go for the Amazon Echo Dot instead.