Microsoft Announced a New Version of Windows 10 Pro for Workstations

As the name implies, the focus is high-end hardware, which means that this Windows version is compatible with Intel Xeon and AMD Opteron CPUs. Because the standard version of Windows 10 supports up to 2 CPUs, up to 2 TB of memory, the new version will allow users of top-level workstations (and OEMs who were trying to make hardware therefor) You will be able to take advantage of power – combined with persistent memory is even more powerful. 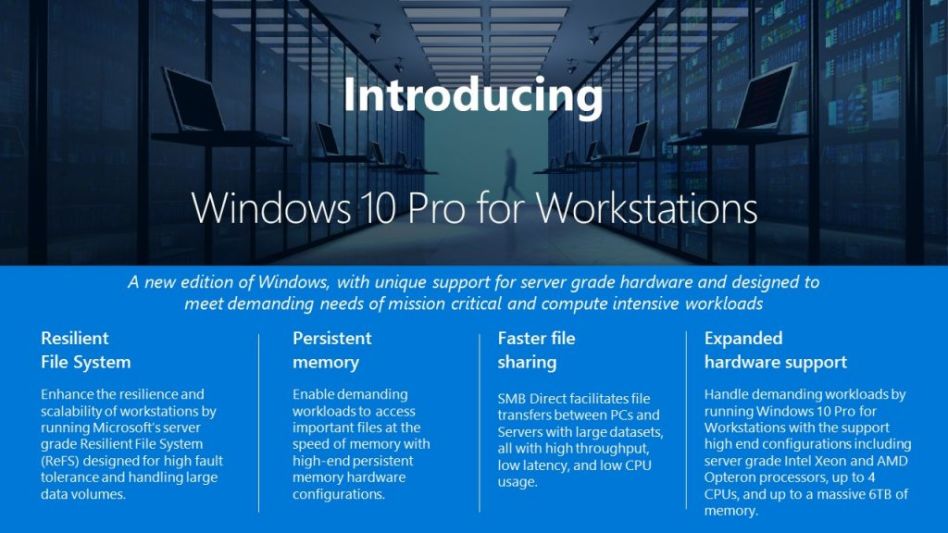 ReFS (Resilient File System) is a file system that enhances data recovery and fault tolerance. It is possible to handle huge capacities and automatically correct errors when one of the drives malfunctions. ReSF is theoretically up to 4.7 zettabytes (1 billion terabytes, corresponding to 8 K video 8 million years) – whilst the volume that can be handled by Microsoft’s standard NTFS system is 256 TB at the maximum – nobody needs this soon Wax) volume can be handled.

In addition, users can share data with other users on the network via SMB Direct. SMB Direct enables high-speed file access with little delay by using Remote Direct Memory Access function and uses little local CPU. Note that this feature can be used with Microsoft’s server OS since Windows Server 2012 release, but it should be noted that proper network adapters are required for operation.

Windows 10 Pro for Workstations will be released as part of Fall Creators Update this autumn.