Apple iPhone X Features: Everything That You Need to Know

Apple is celebrating its tenth anniversary by releasing the iPhone X. Apple released the model in an event in the Steve jobs theatre located on its campus. The post revolves around the flagship model and the changes or introductions that Apple made to the handset.

Tim Cook introduced Apple X as the next big step for the company. The initial notice is the screen, which takes up the entire space rather than the previous generations. Additionally, the surgical grade stainless steel and the rear glass panel offer dust and water protection. The rear glass panel will make it easy for users to opt for Qi charging, which is increasingly becoming a favorite product across the globe. Users can quickly ramp up the battery at coffee shops, airports, restaurants, and other places that they can immediately boost the battery before they head out for the rest of the day.

The 5.8-inch Super Retina Display, adapted from OLED technology, is the first on an iPhone. According to Apple, it rectified the problem of color accuracy and brightness that bothered OLED screens in the past. Additionally, it now supports HDR10, making it easy for a user to view high contrast or 4K videos with ease. It even has the True Tone dynamic adjustment system, which helps in altering the brightness, contrast, and color appearance according to the ambient light. 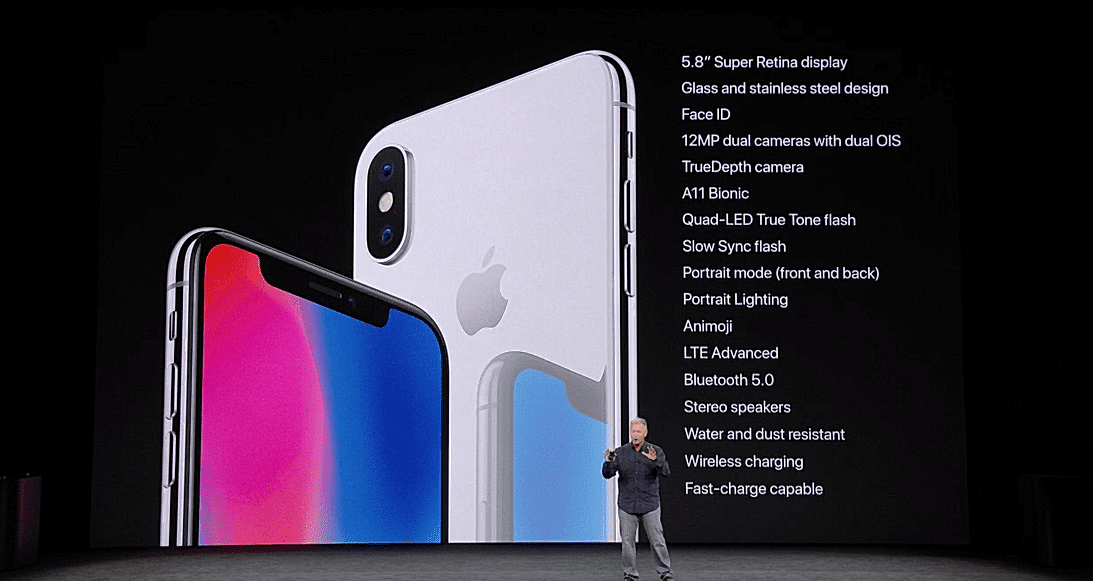 If the rumors were to be true, Apple X would sell the iPhone X with a starting price of $1,000. Apple started accepting pre-orders for both 64 and 256 GB variants. The delivery for the same will begin from November 3. Also, the phone will be made available for walk-in customers across all the iPhone stores on the same day.

The all-new iPhone X heads out into the market with a dual-lens camera, which has optical image stabilization with a wide angle aperture lens. One of the lenses has a f/1.8 aperture, while the other has a f/2.4 aperture. Apple made sure that the front camera to received significant changes to meet the growing demands. It now supports portrait mode, has exposure control, and auto image stabilization. The newly introduced signal processor ensures that the output has a good effect. Users also receive new color filter, and the device uses natural lightning effect along with the newly introduced augmented reality features. One can capture 4K videos at 60fps and slow-motion videos at 240fps. The best thing here is the people who use Garageband in it will be able to have better user experience. If you are a Windows user then fear not, you can get  Garageband For Windows with this guide.

The A11 Bionic chip is a 64-bit processor with a new graphics card running at 30 percent higher than the previous edition. Out of the six cores, four runs at 70% higher for improvement in efficiency, while the other two run at 25% higher to boost performance. When the user carries out multitasking, the bionic chip calculates the activity and spreads or diverts both efficiency and performance according to the requirement. It is an excellent choice for those who often use multiple apps at a single time.